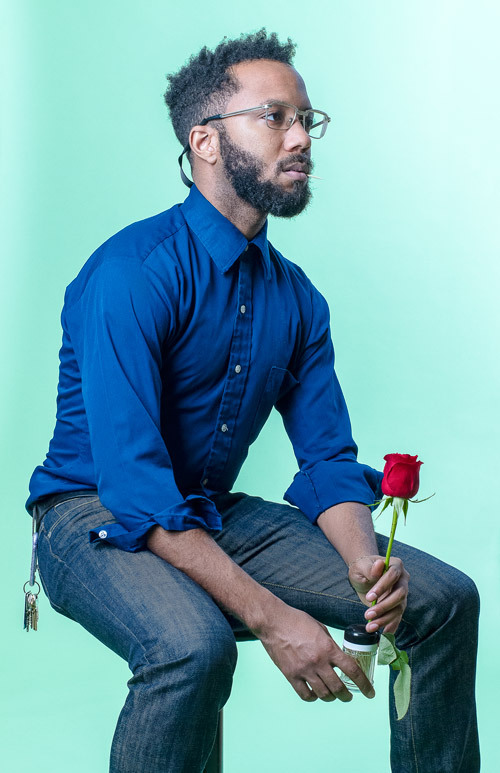 Devin wakes up at 7 AM every morning and skates to the train station, headed to the woodshop. He has a strong eye for identifying street art and scrawled statements in the tiniest of places. A lot of his favorite music isn't on streaming services.

When he's not in his studio you will find him thumping away at his PowerBook or writing rap about rapping. Devin has probably done over than a decade of school at famous schools and he continues to study, read, and write, despite the longwinded bureaucracy of granting councils and tumultuous rejections from slow turnover art programs.

Devin can see himself happy as a weary middle-aged professor with a few kids, but he doesn’t know what will bring him there. Time is like junk food, and he just needs more of it.

Devin will buy himself a rose and a slice of pizza because he feels like it, and he also felt bad for the person selling the roses.

Devin is not a fashion brand or a statistic.

Devin believes he coined GAWS: (1/swag) on his tumblr Studio Workout, but all the same is happy that the jab at swag is now irrelevant and outmoded.

For a good time, try

I don't have a juicer, but this blender does great things and it seems like a really fun and efficient way to get vitamins and protein, especially if you're on the go! Plus you get all the vitamins that get tossed out in the pulp (if they exist).

With these recipes it's homestyle so I kind of just throw things in that I might like and adjust as needed for texture, color et cetera.

... but that saying must have been coined before the invention of the blender, because this thing really takes out the tedium of chewing, and if you add ice cubes and refrigerated items into the mix, you get a temperature and texture experience that was impossible in earlier eras!

You may find yourself having to switch through a variety of different settings on the blender, or shaking the ingredients inside of it to speed up the mixing process, but keep in mind that with a little extra time prepping (like cutting the fruit into smaller chunks) you speed up the process.

Help the blender help you

(especially if it has only one setting)! Since I tend to put so much in there, I find that I end up with 2 , 2.5 big glasses of smoothie delights.

it's great with a spoon!

If you have extra, toss it in the refrigerator for later.

If you're lactose intolerant you can replace the yogurt with soy milk.